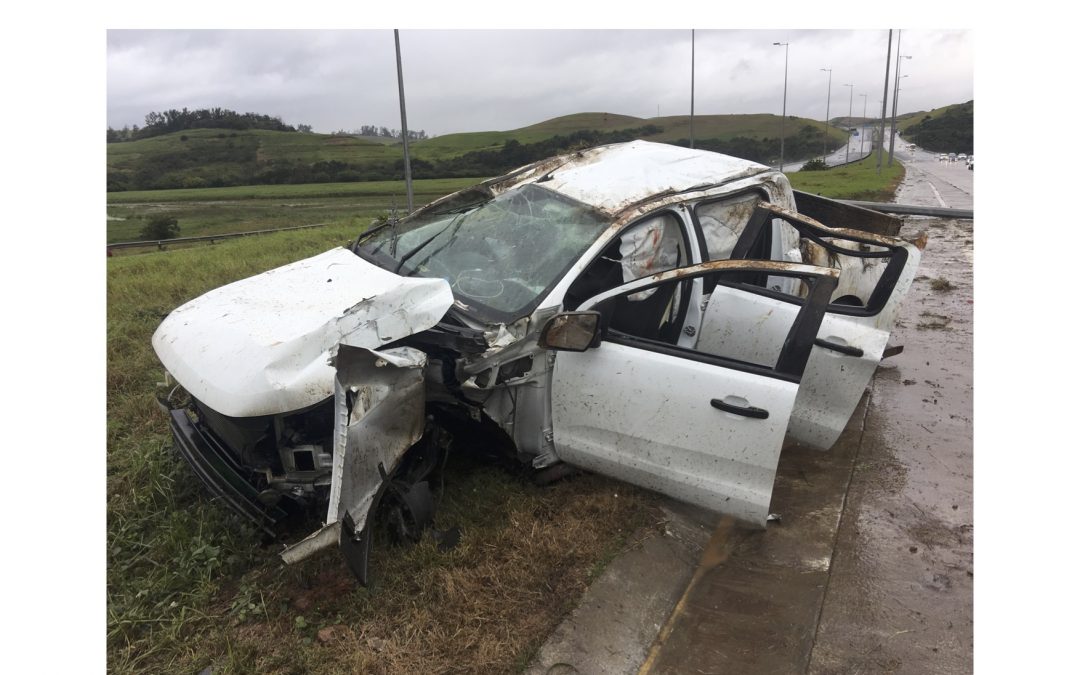 At 09h10 15 May we were traveling in the middle lane along the N2 Northbound and approaching the glide-off to the the King Shaka International airport when we hit what looked like a puddle of water which caused the Ranger to aquaplane. I am an experienced driver and responded in anticipation managing to right the Ranger which was gliding perilously close toward a SBV vehicle that was in the lane on our left. Immediately that the vehicle righted itself however, it began to slide again but this time, I reacted to no avail. The Ranger was now out of my control. I sat helplessly as the Ford glided through the fast lane and into the drain which launched the Ranger making it airborne and sent it crashing through a 25 meter tall streetlight before it hit the ground and began rolling along the centre island. All that I heard was the sound of my wife’s voice pleading “Please God save us”, over and over again. Then there was chaos whilst the Ford rolled 3/4 times according to eye witnesses. We have no idea but after the chaos there was silence and the immediate realization that the vehicle had come to a rest on its wheels, or what was left of them and that we were alive.

After assuring each other that we were all okay, I climbed out of the drivers side window as my door was jammed. I was met by Shane who had managed to alight his side of the vehicle and who was evidently suffering a head injury judging by the blood on his face. I went immediately to my wife’s door which was open. All that she could say was that her left leg was hurting and that she couldn’t move it. I expected the worst but to my relief, Esmé looked perfect. As for me, my left shoulder hurt and I had glass cuts all along my left forearm. My head hurt and my short-rib area was also tender.

The vehicle was an obvious right-off. By the sight of the vehicle, it was a Miracle that we had survived without even serious injury.

When the authorized and approved towing company “Big Show Towing” arrived (after the vultures were almost forcefully removed from scene), the owner of Big Show Towing Ismail Mitha, told me that his company had already towed twelve other vehicles from the same place in a spate of 4 days. Ismail told me that we were the 13th vehicle to be towed by his company since the rains started Friday 12 May.  He eventually towed 16 vehicles from the same spot by the end of this day.

We were transported by ambulance to Victoria hospital where we received medical treatment after which we all went for x-rays. X-rays showed that both my wife and Shane were okay internally but that I had fractured my left shoulder. Days later I only found out that two of my ribs were also broken. Shane suffered a deep and long gash to his head and Esmé suffered a hematoma in her left leg. We were all battered and bruised but ALIVE.

Doctors asked to run more tests on Esmé and Shane so I made a call to my informant and thereafter a duty call, that being to leave Esmé and Shane at Victoria hospital and to push on alone as I had an informant to meet with and the situation had escalated.