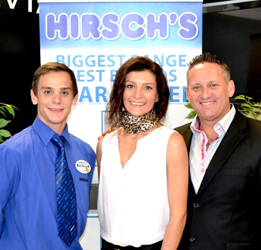 Private investigator Brad Nathanson spoke about crime in the Upper Highway Area at a recent business breakfast hosted by Hirsch’s in Hillcrest. He started his talk by saying that the crime had decreased in the Upper Highway area largely due to the Intervention Unit that had been deployed in the area.

He cautioned residents, however, not to get too complacent as, sadly, the Intervention Unit is not here to stay. He recommended that Upper Highway communities stand united and get to know one another, saying neighbours need to know each other so they could phone one another if they spot anything out of the ordinary.

Brad went on to raise the following points from a residential robbery research project:

• 8 out of 10 residential robberies are committed with the help of inside information from maids, gardeners and former employees.
• Robbers will monitor the home for as long as two weeks beforehand.
• Gangs research armed response firms and their response times. Most attacks occur between 7pm and midnight and continue through to 4am. 97% of robbers are armed.
• On average an armed robbery gang has four members.
• It is a complete myth that only white people are victims of robberies. The average ago of a house robber is between 19 and 26 years.
• An average of 30% of all house robbers have either committed murder, or won’t hesitate to commit murder.
• Of all the arrests, 90% of robbers have no education and the 10% that do have given up their jobs when learning how much they can make through robbery.
• The average robber commits 103 robberies before being caught and convicted.
• Security measures that robbers do consider to be a deterrent include Electric fences, CCTV, Detection beams and small dogs that sleep inside (considered the biggest deterrent).

Brad emphasised the importance of having a safe room in the house in which you can lock yourself such as the bathroom where there is not much value. Ensure there is a panic button and a fully-charged cell phone and something to protect yourself with.

In the event that the criminals should confront you before reaching the safe room, remain calm and submissive but firm. Tell them to take what they want but not to harm anyone, do what they say but refuse to be tied up. Do not look at them directly and realise, they are just as terrified as you are.